What's a wine cave? And other top moments from the December Democratic debate in Los Angeles 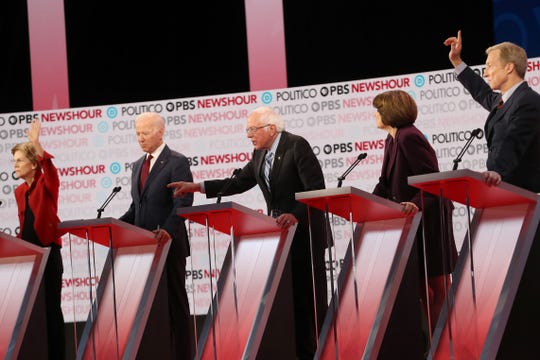 Seven candidates took the stage for the sixth debate round of the Democratic primary, just one day after the House voted to impeach President Donald Trump. It was the smallest debate stage in the primary thus far.

The final debate of the year started off with measured responses to policy questions but heated up as candidates reverted to speaking over and attacking one another.

Here are some of the top moments from Thursday evening:

Spotlight put on decrease in diversity on the debate stage

Increasingly strict criteria to qualify for the stage has also narrowed the diversity of candidates in the debate, edging out candidates like New Jersey Sen. Cory Booker and former Obama administration cabinet member Julián Castro.

“It is both an honor and disappointment to be the lone candidate of color on the stage tonight,” businessman Andrew Yang said. “I miss [Sen. Kamala Harris] and I miss Cory, although I think Cory will be back.”

Yang touted his plan to give Americans a “freedom dividend” of $1,000 a month as an attempt to bolster the campaigns of candidates of color.

“You know what you need to donate to political campaigns? Disposable income,” Yang said.

The candidates signed onto a letter sent to the Democratic National Committee by Booker, arguing that the debate qualification standards should be changed for the early 2020 debates because of the shrinking diversity on stage.

In a tense exchange between Vermont Sen. Bernie Sanders and PBS moderator Amna Nawaz, Sanders tried to pivot from the question about diversity to a point about climate change.

“Senator, with all due respect, this question is about race. Can you answer the question that was asked?” Nawaz said.

​He went on to explain that climate change hits people of color the hardest and highlighted the importance of members of affected communities giving input in policy discussions. He said representation should extend to the debate stage.

“We need an economy that focuses on the needs of oppressed, exploited people, and that is the African American community,” he said.

Americans are divided over impeachment because of the media, Yang says

As in previous Democratic debates since the launch of the inquiry into Trump, impeachment was the first focus of the night on Thursday. Candidates were asked how they can convince Americans to support the impeachment.

Yang hit the news media, saying the reason Americans are divided on impeachment is because of the media they consume. “It’s clear why Americans can’t agree on impeachment, we’re getting our news from different sources and it’s getting hard for us to agree on facts,” he said.

Yang said voters “don’t trust the media networks to tell them the truth.”

“The media networks didn’t do us any favors by missing a reason why Donald Trump became our president in the first place,” Yang said. “If you turn on cable news today, you would think he’s our president because of some combination of Russia, racism, Facebook, Hillary Clinton and emails all mixed together.”

“We have to stop being obsessed over impeachment,” Yang said.

Massachusetts Sen. Warren and Biden said the impeachment process is not about convincing Americans, but rather upholding the Constitution, while Minnesota Sen. Amy Klobuchar and businessman Tom Steyer said Trump should allow his staff to testify.

Despite concerns over candidates’ ages, Biden won’t commit to running for a second term

Politico’s Tim Alberta asked Biden if he would commit to running for a second term as president considering that he would be 82 years old upon the end of a first term.

The question comes after Biden denied Politico’s reporting that he was thinking about only serving for one term if elected. The former vice president would be 86 at the end of a second term. Biden said he would not commit one way or the other, but not before a tense exchange with the moderator.

“You’d be the oldest president in American history,” Alberta began to say, as Biden interjected to point out Winston Churchill.

Alberta clarified that he was asking about American history, to which Biden responded, “I was joking, that was a joke.”

“Politico doesn’t have much of a sense of humor,” Biden quipped.

“Oh we’ve got a great sense of humor, they wouldn’t have put me on stage otherwise,” Alberta said.

Asked if he would commit to running for a second term, Biden said, “No, I’m not willing to commit one way or the other.”

“Here’s the deal, I’m not even elected one term yet, and let’s see where we are. Let’s see what happens,” Biden said.

He has previously denied talking to aides about limiting his presidency to one term. He maintains that he brings experience to the presidency.

Sanders, too, was asked about his age. Quoting a report that former President Barack Obama said that having women leaders would lead to worldwide improvements, and that “If you look at the world and look at the problems, it’s usually old people, usually old men, not getting out of the way.”

“Sen. Sanders, you are the oldest candidate on stage,” Alberta said.

“And I’m white as well!” Sanders chimed in.

South Bend, Ind. Mayor Pete Buttigieg took heat for a recent fundraiser that was held in a wine cave in Napa Valley, Calif.

But Buttigieg responded that he is the only one on the debate stage in Los Angeles who is not a millionaire or a billionaire. According to Forbes, Buttigieg’s net worth stands at about $100,000.

Warren should not issue “purity tests” that she cannot pass herself, Buttigieg said. Buttigieg argued that Democrats cannot afford to turn any donors or supporters away in order to get as many resources as necessary to defeat President Donald Trump.

Warren called on Buttigieg to swear off fundraising events like the ones Buttigieg attended earlier this week. But Buttigieg said she brought money to her 2020 presidential campaign from previous campaigns where she did hold such events.

Warren wasn’t the only one criticizing Buttigieg’s recent fundraising event. Yang said the country needs to change how campaign finance works so “they don’t have to go shake the money tree in the wine cave.”

[email protected] Did you all talk about the poor in that Silicon Valley wine cave?

Rep. Joaquin Castro, D-Texas, twin brother to presidential candidate Julián Castro who is not on Thursday’s debate stage, asked “Did you all talk about the poor in that Silicon Valley wine cave?” on Twitter.

Sanders pitted Biden against Buttigieg for how many billionaire donors they have to their campaign. Per Sanders’ tally, Biden leads Buttigieg 44 to 39.

“Pete, we look forward to you—we know you’re an energetic guy, and a competitive guy—to see if you can take on Joe on that issue,” Sanders said to laughs in the crowd.

“But what is not a laughing matter my friends, this is why three people own more than the bottom half,” Sanders said. “This is why Amazon and other major corporations pay zero in federal taxes. We need to get money out of politics. We should run our campaigns on that basis.”

Ahead of the debate, Sanders’ top strategist Jeff Weaver wore a shirt promoting a “PetesWineCave.com,” a website that goes to a donation page for Sanders’ campaign.

Posted by mediaadmin at 9:40 PM

Email ThisBlogThis!Share to TwitterShare to FacebookShare to Pinterest
Labels: a, and, cave?, o, What&#039;s, wine