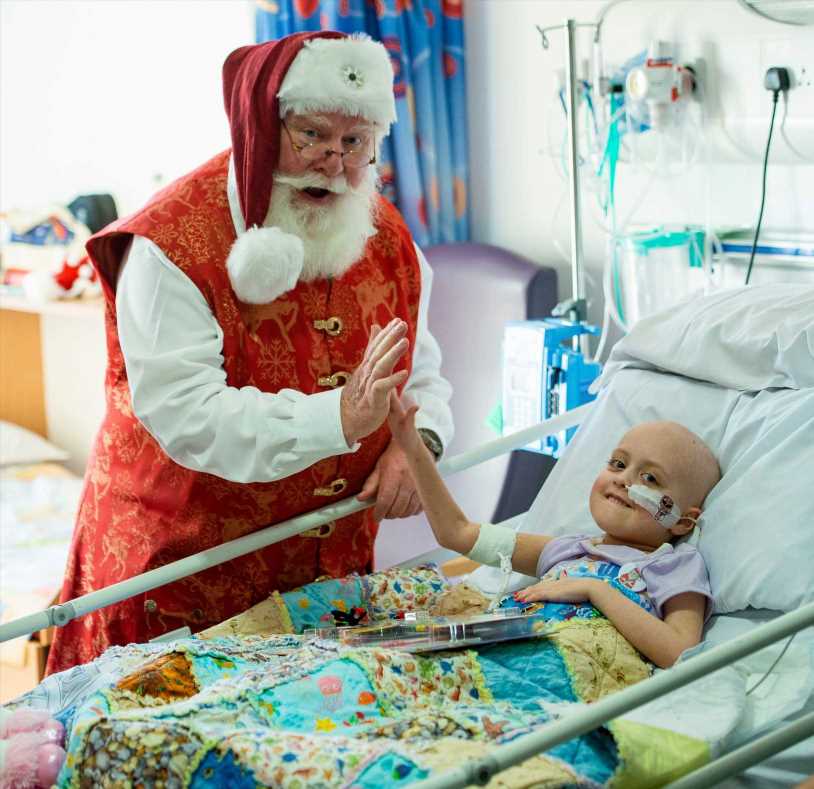 BEAMING Perrie Fernandez gives Santa a high five after Christmas came early for ill children in hospitals around the UK – thanks to our generous readers.

The ecstatic five-year-old was one of the first children visited by Father Christmas after readers donated thousands of pounds to The Sun on Sunday’s Xmas Quids For Kids Campaign. 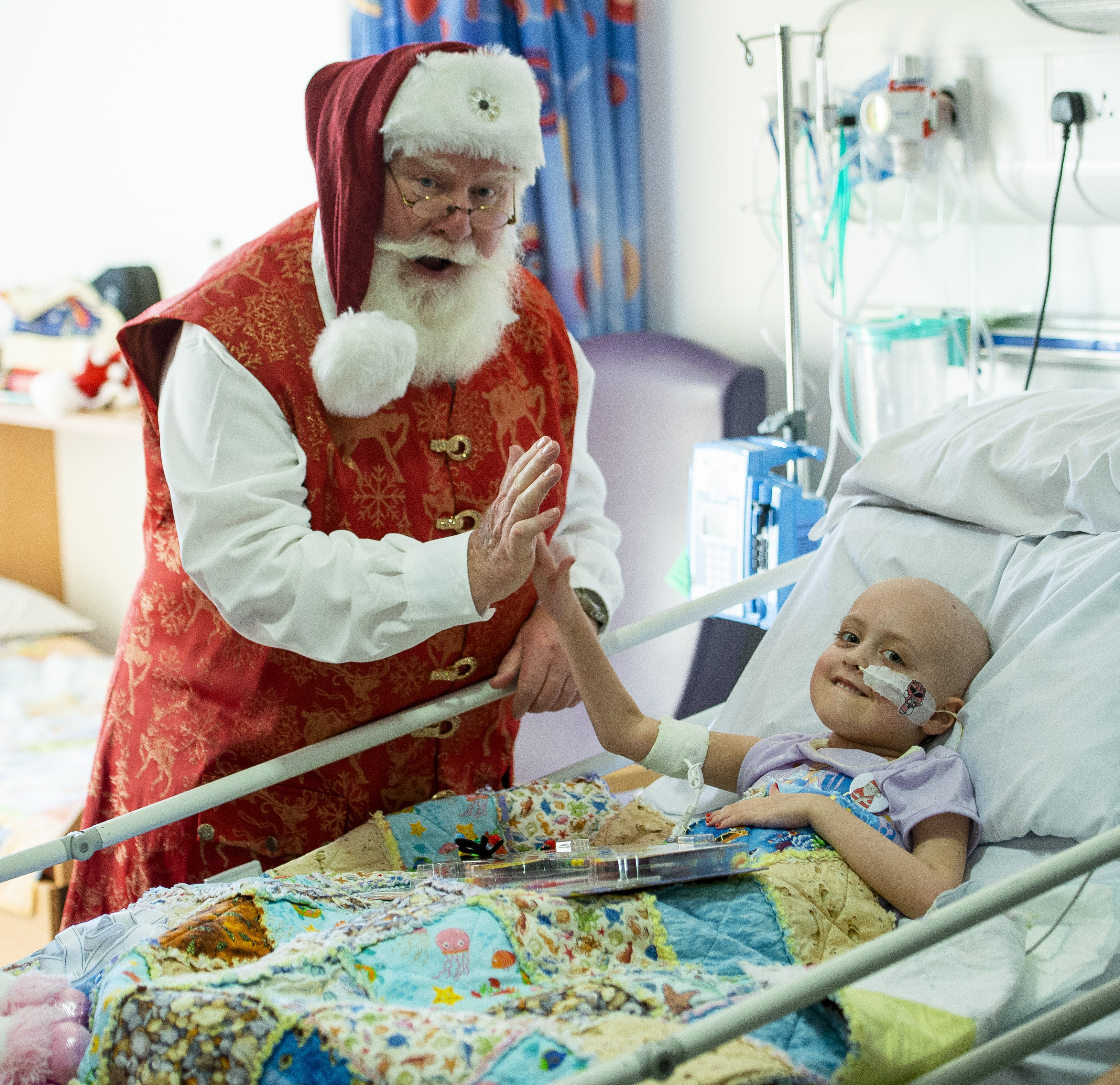 Brave Perrie, who has been in hospital since October after being diagnosed with leukaemia, gave a dazzling smile as Mr and Mrs Claus visited her children’s cancer ward in Newcastle upon Tyne.

She said: “Seeing Santa is amazing and  I can’t believe he brought me a present. I told him I want a pink football kit for Christmas."

“He told me I’m on the good and the brave list, too. I didn’t even know there was a brave list.”

Perrie’s mum Michelle, 32, a council admin worker, and dad David, 34, a security guard, from Durham, have been by their daughter’s side throughout her treatment and will spend Christmas Day in hospital with her. 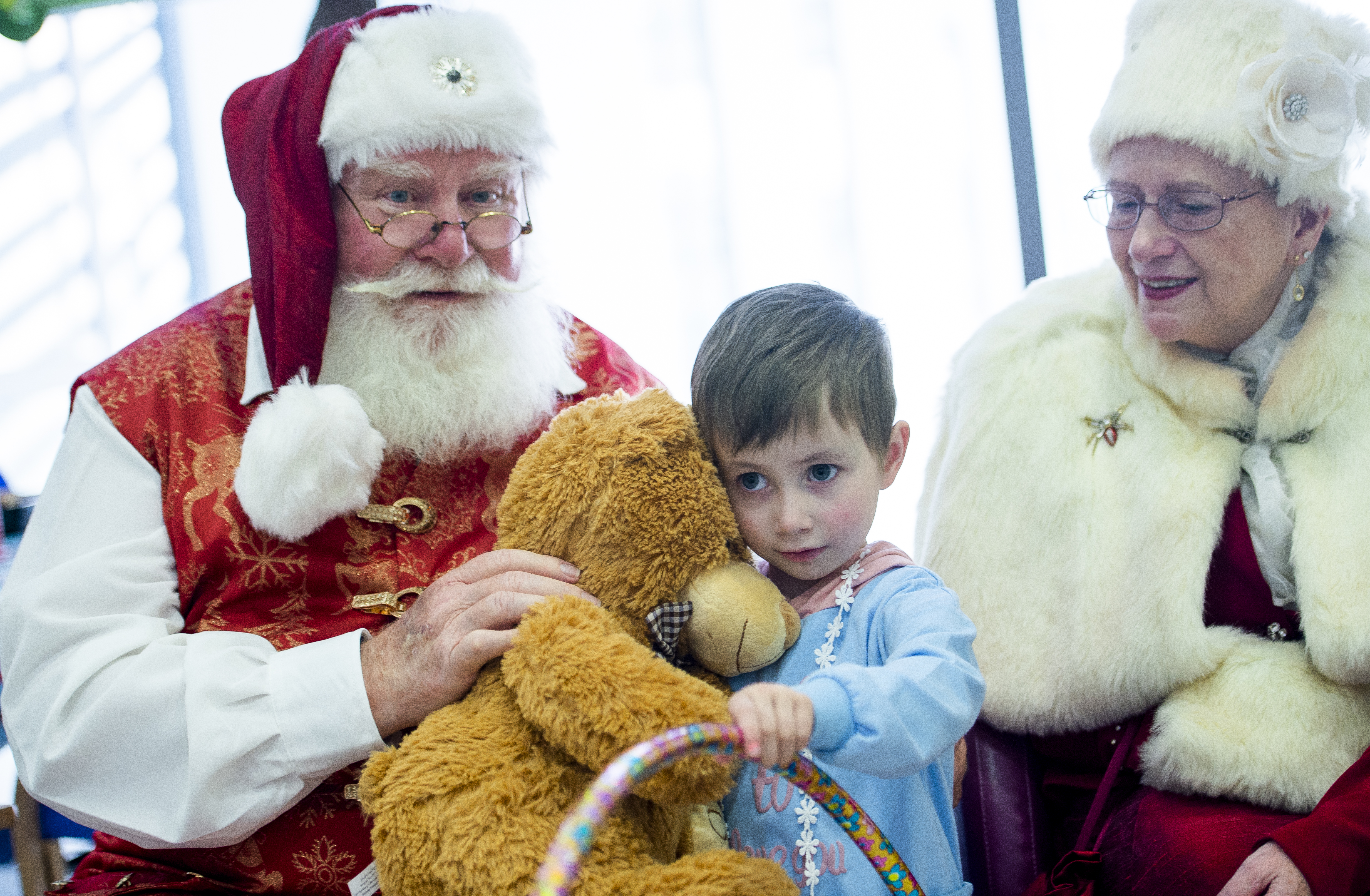 Perrie finds it hard to get out of bed and has to stand with a frame, so having Father Christmas make the trip to her means a lot.

Michelle said: “Perrie’s been through so much, but through it all she’s had a smile and amazing positivity."

“We don’t know what her future holds at the moment. It’s unlikely we’ll be home for Christmas but we’re trying to stay positive."

“She’s such a ray of sunshine. How can we complain when she’s so positive in the face of cancer?” 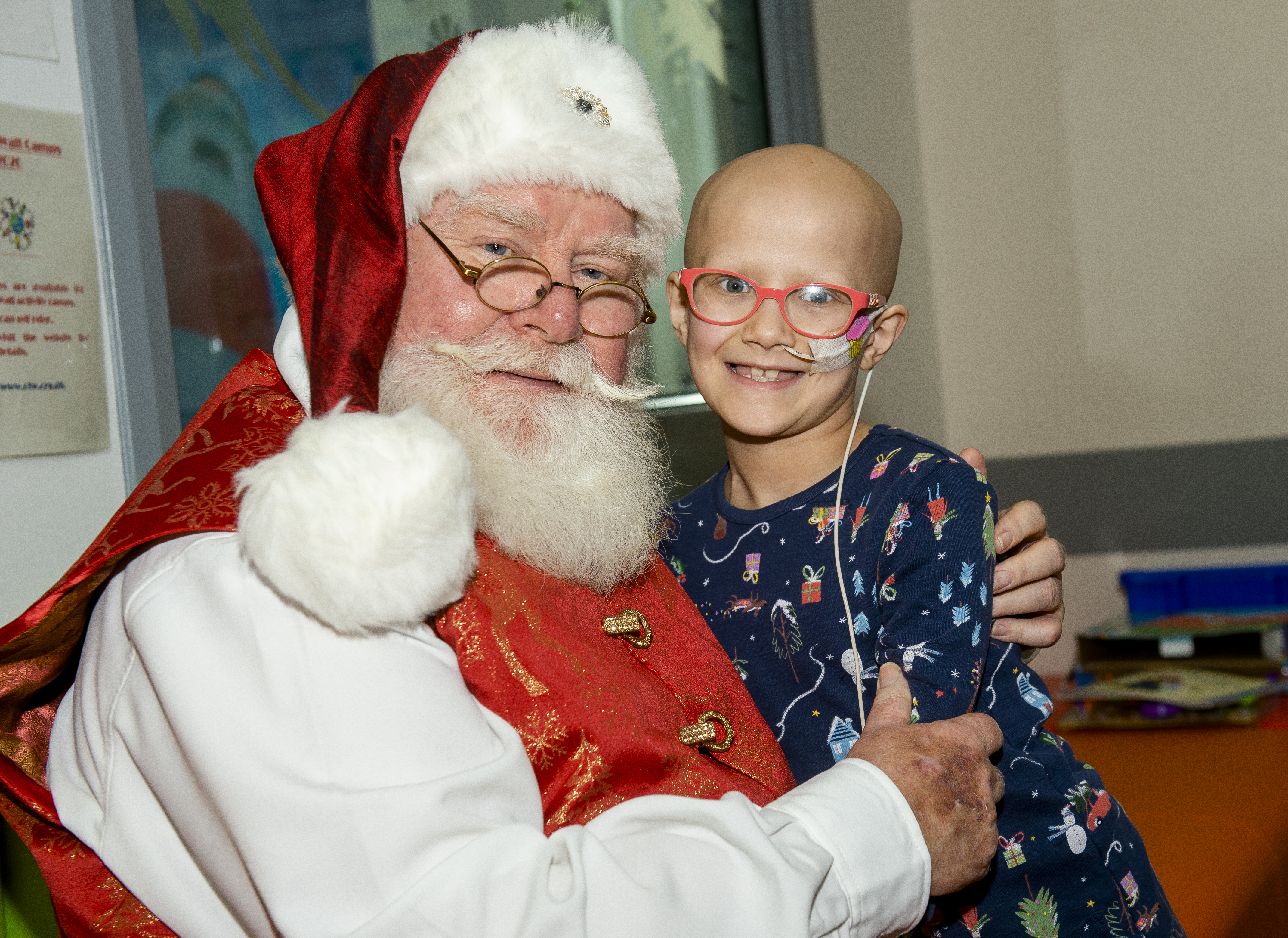 Donations have flooded in as thousands of you dug down the back of sofas, checked in coat pockets and even brought dusty money boxes to our collections in Intu shopping centres in Essex and Newcastle and to Birmingham’s Bullring and Grand Central.

Thousands more donated online and by text, as well as at Premier Inns and McColl’s convenience stores. X Factor guru Simon Cowell, reality star Vicky Pattison and Paralympian Will Bayley backed the campaign and helped raise thousands of pounds for presents, experiences and cutting-edge research and trials into childhood diseases.

Eight-year-old Keisha Watson, from Hartlepool, was diagnosed with leukaemia in 2015 and is on her third relapse. She was overjoyed to see Santa. 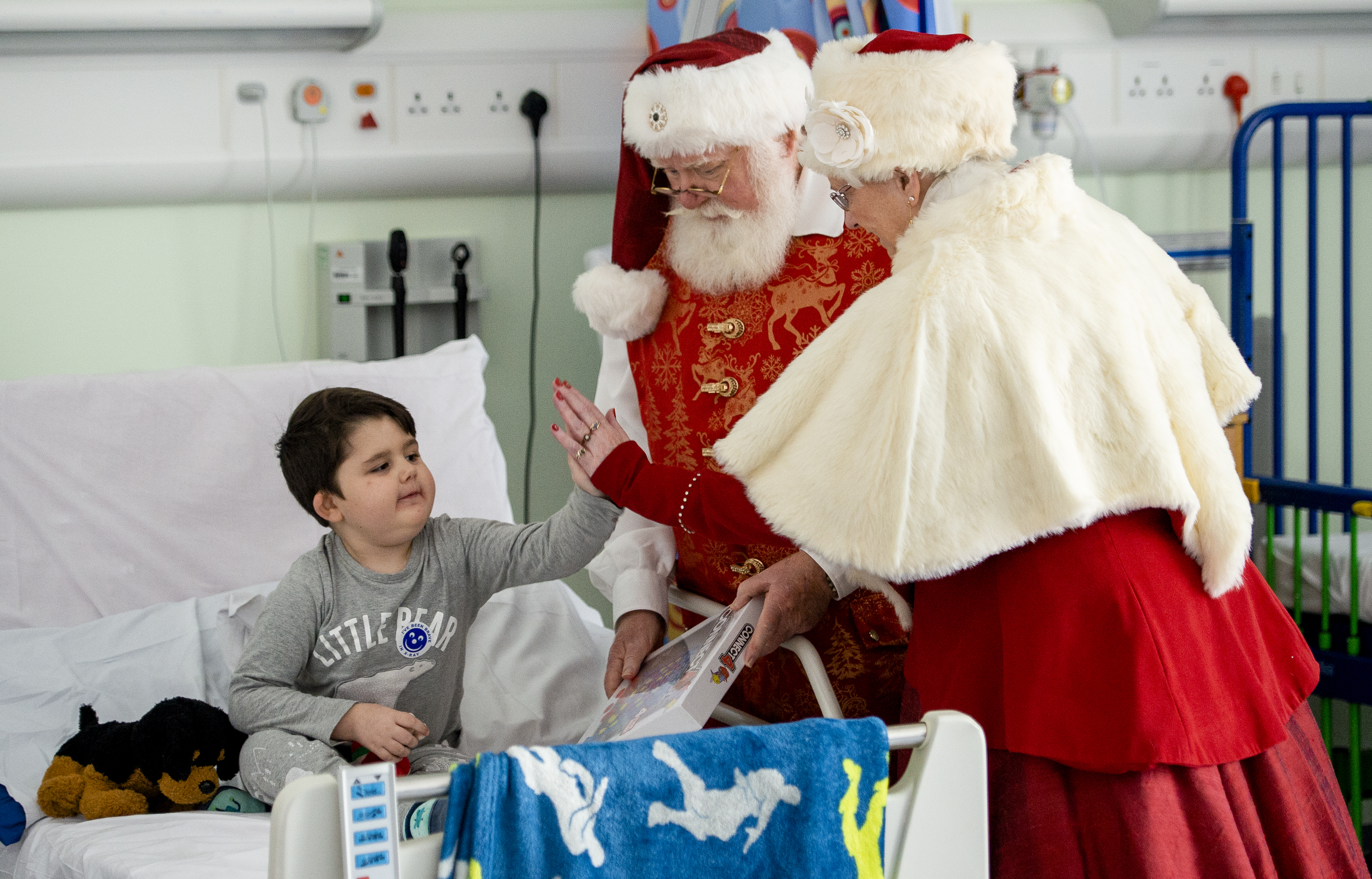 Keisha has undergone gruelling radiation therapy and a bone marrow transplant and will have another transplant in the New Year.

Mum Natalie, 35, said: “Life collapsed when she got her diagnosis. And Keisha’s smart — she knows what’s going on — so it’s been hard to stay positive around her and not let her know how worried I am.”

Having been admitted to hospital with a virus just days before Santa’s visit, Keisha will not be home to spend Christmas with her brothers Kain, 14, and Ryan, 20 weeks, and sisters Scarlett, four, and Bella, one.

Beaming after her visit from Father Christmas, Keisha said: “I’ve asked Santa for a Segway and an iPhone 11 pro. But Mum says they’re both a bit too expensive so I’ll have to wait and see what I get.” 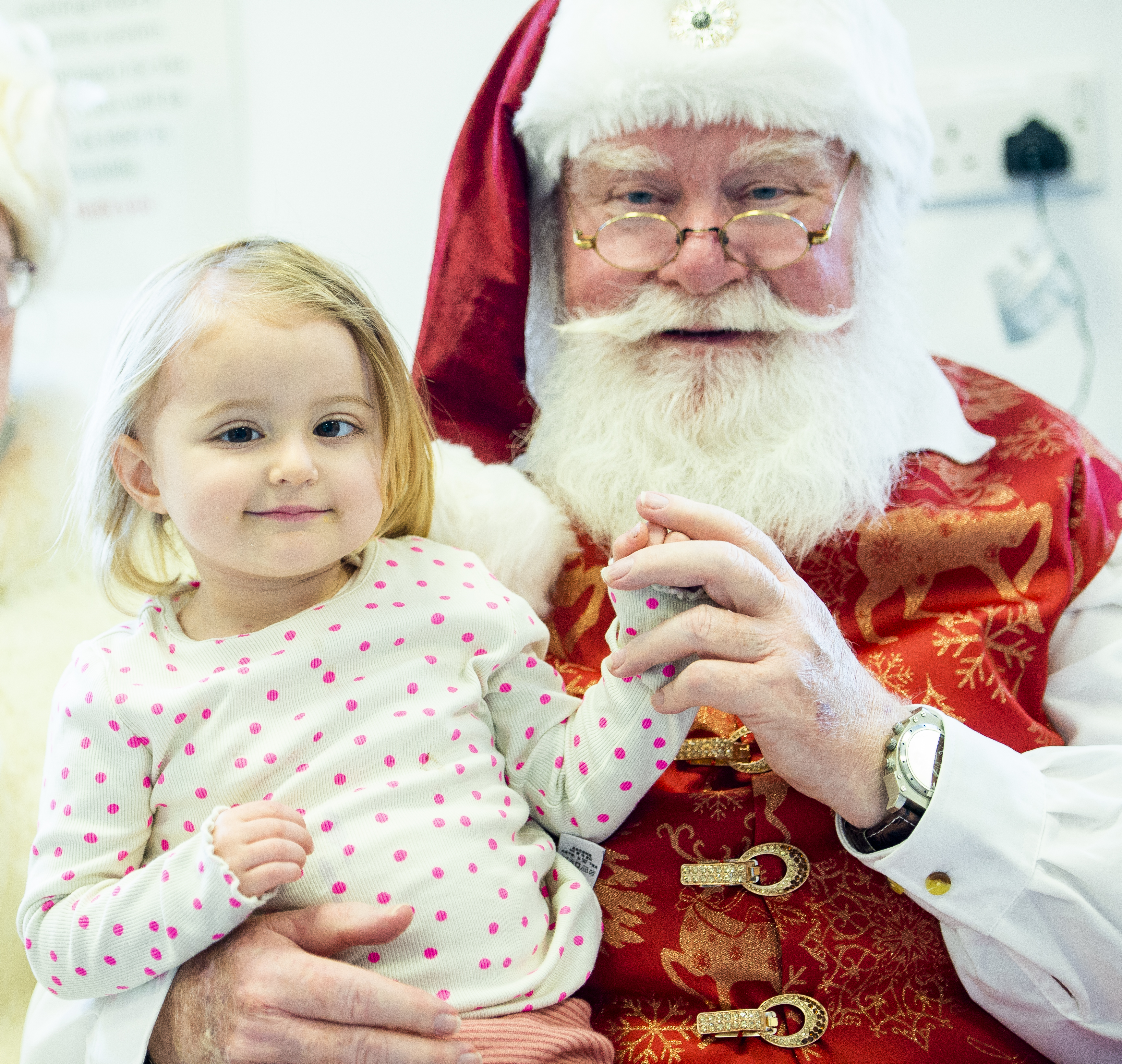 Two-year-old Harper Burns, from Solihull, was in hospital in Birmingham with breathing difficulties when Santa popped in. Her mum, Kira Hewitt, 28, a clinical support worker in intensive care at Birmingham Children’s Hospital, said: “Seeing Father Christmas was such a lovely surprise and a real treat."

“I’d booked her to see him today and she was heartbroken we couldn’t go when she became ill, so having him come here and give her a present is a dream come true.”

The magic of Father Christmas may be different for teenagers, but 15-year-old Grace Anderson, from South Shields, Tyne & Wear, enjoyed taking selfies with him to show her friends when they visit her in the Royal Victoria Infirmary in Newcastle.

She has been in and out of hospital since July when she was diagnosed with synovial sarcoma, a rare type of cancer that affects soft tissue. Grace has had six rounds of chemotherapy, six weeks of radiotherapy, around 30 treatments and surgery to remove the cancer. 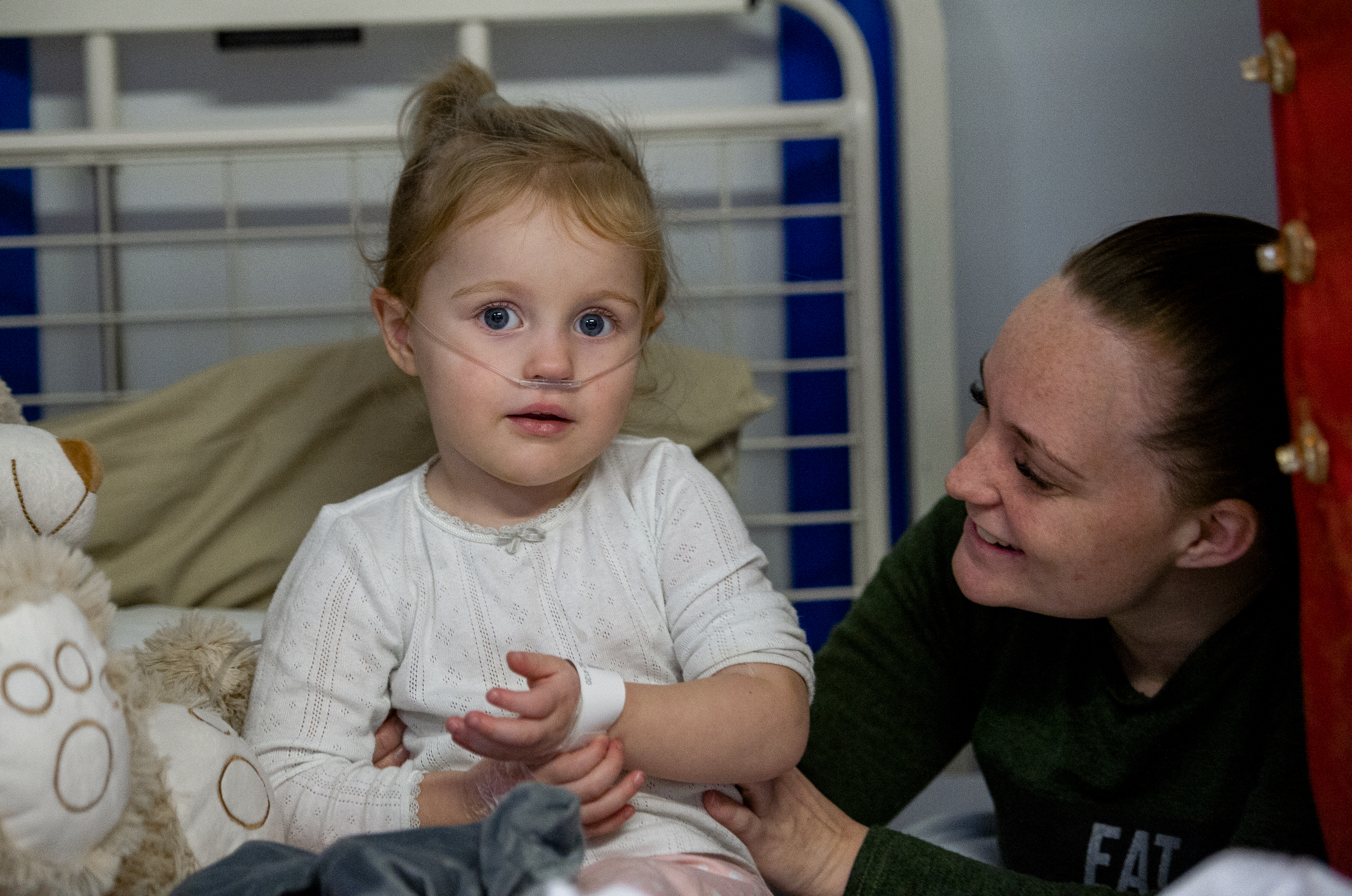 She has also had a transplant of part of her quad muscles from her left leg into her right.

Mum Clare Blakeley, 45, who works for Iceland, said: “She’s the best daughter in the world. She rarely gets down about it and refuses to be negative. I honestly don’t know how she does it.”

Grace added: “I’ve asked Mum for money for Christmas so I can go out shopping with my friends when I get out of hospital. The Sun on Sunday readers have been amazing. They’ve made this journey that bit easier to be on.” 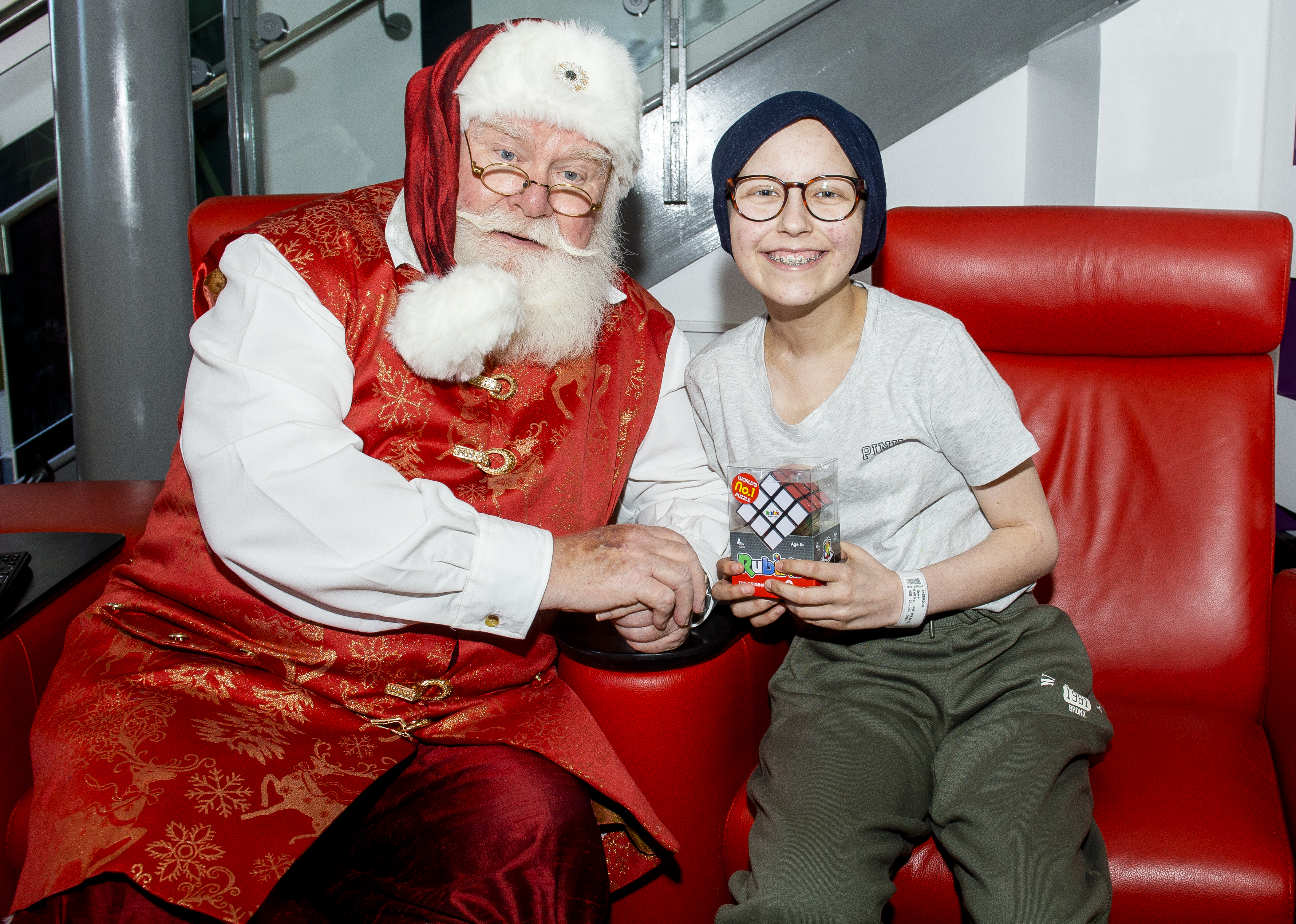 Lana’s family, from Newcastle upon Tyne, backed the Quids For Kids campaign after their daughter was diagnosed with a rare and incurable brain cancer.

Dad Andrew, 40, a mechanic, said: “Lana needs time so research can hopefully find a cure for her. There’s no cure in the UK but there’s research going on in the US that could lead to one. Donations to Quids For Kids will allow specialists here to work towards a cure that could give Lana her life back — every penny counts.”

While the brave tot was given a present from Santa, she asked him for a toy barbecue on Christmas Day. She explained to him: “I’ve got a little cooker at home and I want a barbecue to go with it."

Tayler Lindridge, who The Sun on Sunday met last week, also got a visit from the man in red. The seven-year-old, from Hartlepool, was diagnosed with stage four Wilms tumour at Easter this year. 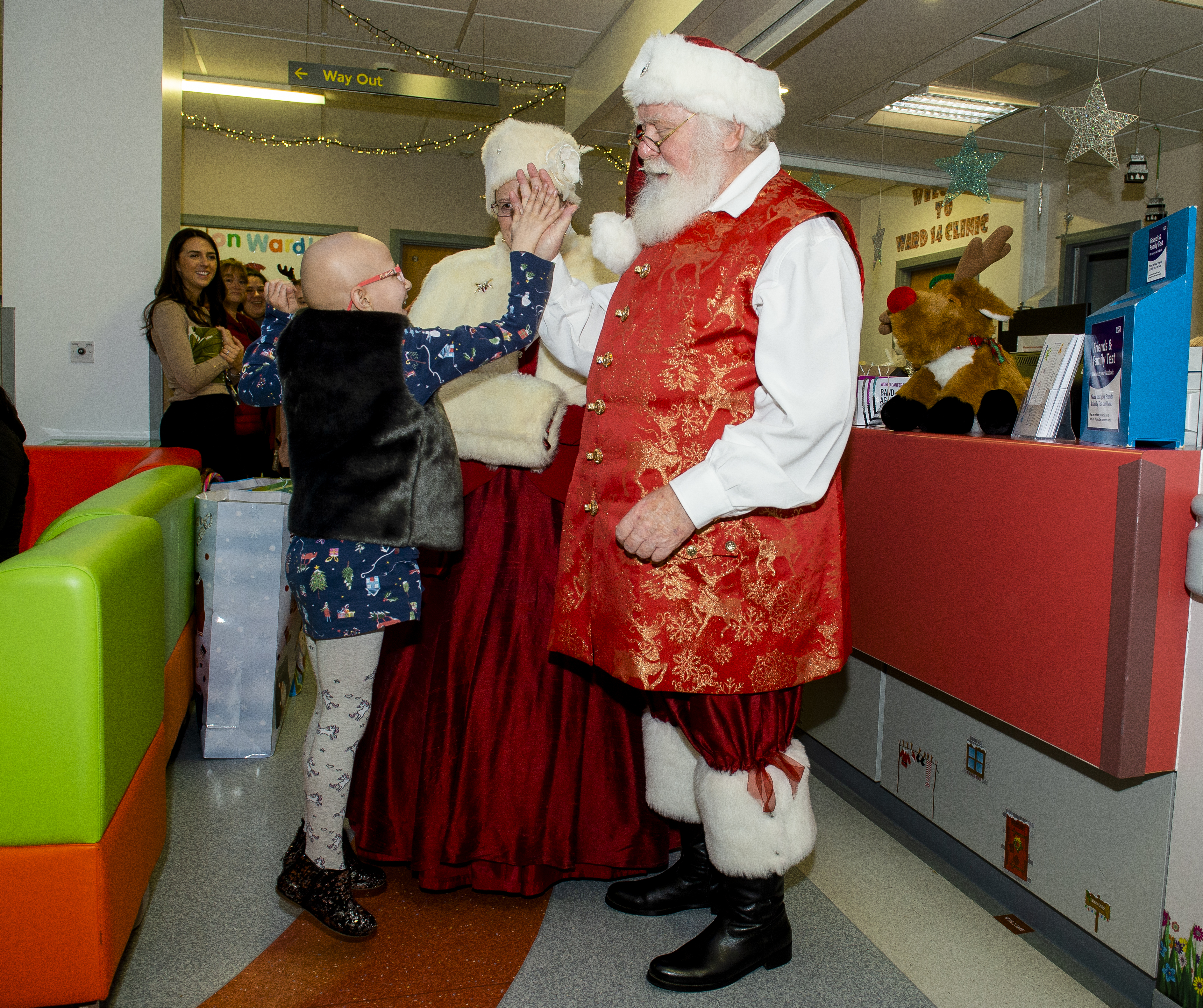 But just eight months on, he is now cancer-free. Mum Chelsea, 27, said she will ring the bell, signalling the end of treatment, shortly after Christmas — the greatest gift the family could have hoped for.

Chelsea said: “It’s been such a difficult year for us. This is a Christmas we weren’t sure she’d have. The Quids For Kids campaign has raised so much money for children like Tayler who really need it. We’d like to say a huge thank you to everyone who dug deep. Tayler is living proof your donations matter.”

As little Emily Rudsdale, nine, hula-hooped with her present from Santa, mum Kylie revealed how tough her year has been. Kylie, 31, a supermarket worker from Prudhoe, Northumberland, said: “She was diagnosed with liver cancer in July and has had pre-surgery chemotherapy and is now waiting for an operation.”

Despite her smiles and giggles, Kylie said Emily was terrified when she was diagnosed. 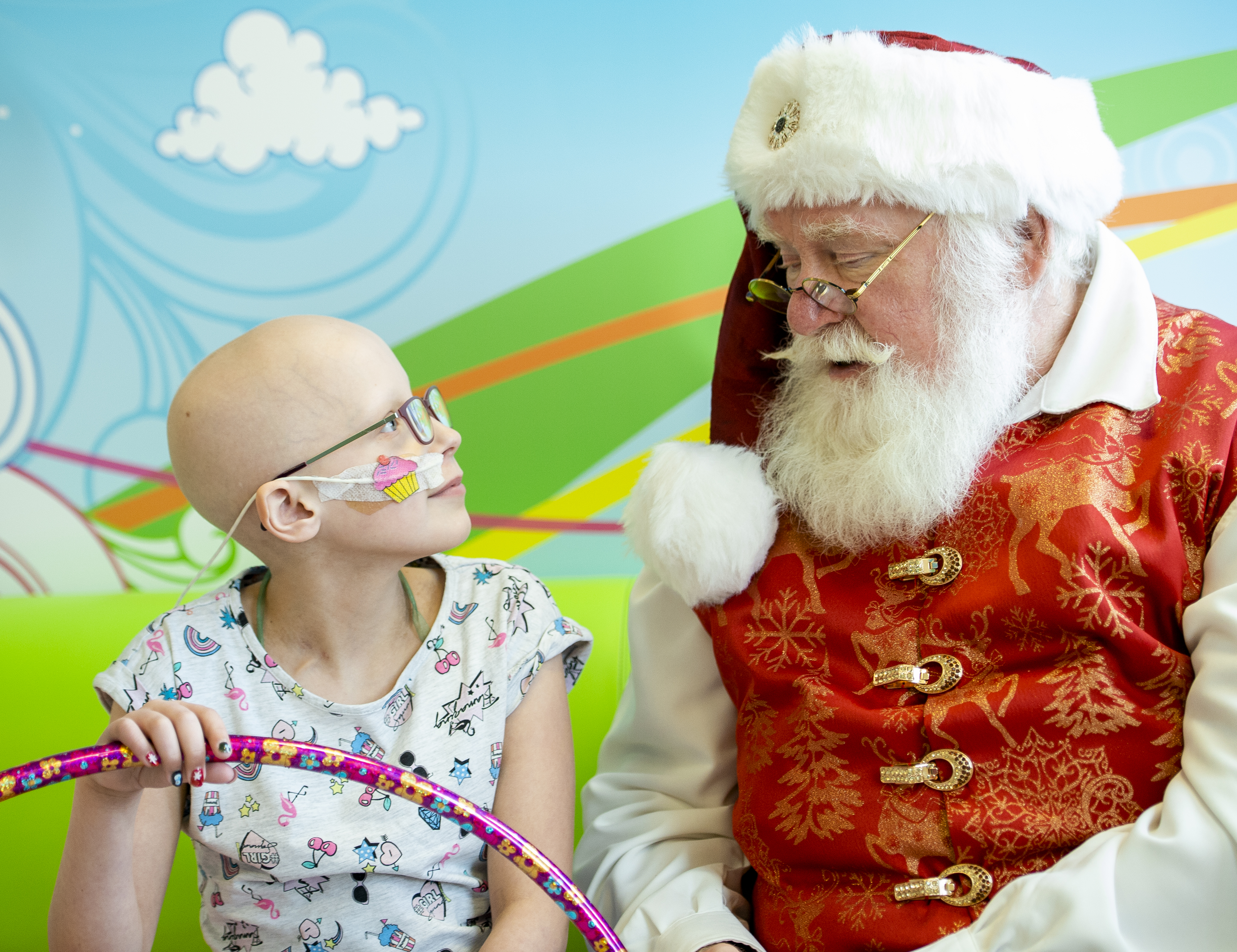 She said: “She’s so clever that she knew instantly how serious a cancer diagnosis is. She was anxious about the treatment, she’s been scared about the upcoming surgery, but the play specialists here have been amazing."

“They’ve shown her what will happen with teddies and they’ve spent time trying to get her more confident about what lies ahead. She asked for a hula hoop for her little sister Katie, who is seven, and Santa gave her one, which was so kind.”

“I’d like to thank everyone who has donated to the campaign. Every single one of them is just amazing.”

Email ThisBlogThis!Share to TwitterShare to FacebookShare to Pinterest
Labels: and, caring, generous, Our, reader