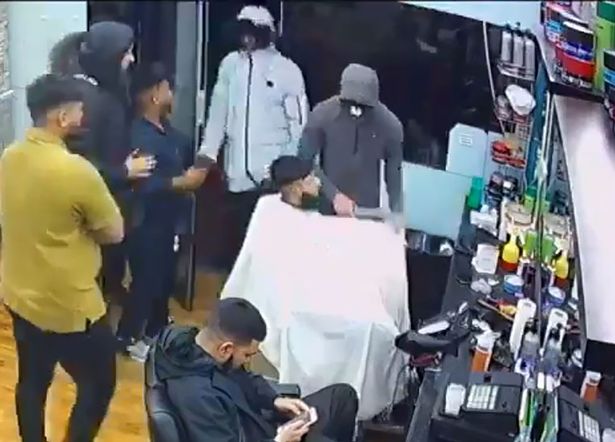 A group of brazen robbers were caught on camera in Newham brandishing knives and threatening a man to hand over his watch and bag.

The gang approach the customer by the entrance and pull out machete-like knives from a paper bag before asking the customer to take off his watch and bag.

A man sitting by the door joins the gang and leaves when they take the customer's belongings.

The barber can then be seen carrying on with the haircut as if nothing had happened.

The lack of reaction from the victim left commenters online shocked.

Aji Hussain said: “All stayed calm because unfortunately it's a norm here now!”

Salva Butt Al-Aza added: “Look at this guy he got robbed for his watch and he just carried on getting a trim.”

Sham Chaudhry said: “I love how the barber just carries on with his trim.”

Rehana Hanif wrote: “No one seems bothered about it even after they left.”

Hemant Batra said: “What the f***! All remained calm like nothing happened!”

According to Newham.info crime rates in the borough are above the London average.

Figures stretching from October 2018 to September 2019 reveal the overall crime rate in Newham stands at 102.4 per 1000 people.

The rate for robbery in Newham stands at 5.2 which is above the London average of 4.2.

Possession of weapons is also above the London average of 0.8, standing at 1.1.

A spokeswoman for the Metropolitan Police said they had no reports of a crime matching the date, description or location.

Posted by mediaadmin at 7:07 AM

Email ThisBlogThis!Share to TwitterShare to FacebookShare to Pinterest
Labels: at, ba, in, knifepoint, Man, robbed