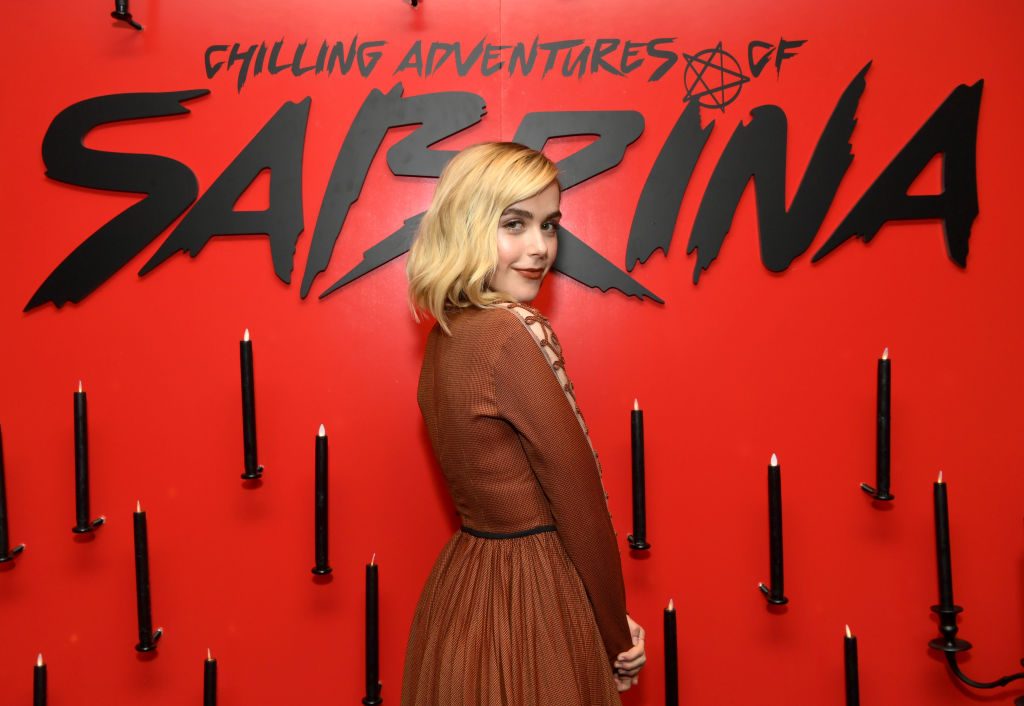 Praise Satan! Season 3 of Netflix’s hit show Chilling Adventures of Sabrina has finally been announced. In October of 2018, fans fell in love with Kiernan Shipka’s Sabrina and the half-mortal and half-witch world that she inhabited. The show, with its dark elements, tackles important issues such as identity, family ties, gender, sexuality, and disabilities with immaculate skill. After part one released in October, fans all but demanded part two and were overjoyed when it released back in April of 2019. However, until very recently, the release date for the highly-anticipated part three was largely unknown.

But, fans of Chilling Adventures of Sabrina weren’t the only ones who were jonesing to know when season three would hit Netflix. Even the cast seemed to be dying of anticipation. On November 21, 2019, Kiernan Shipka, who leads the series as the legendary Sabrina Spellman, posted a picture of herself in character covered in fake blood smiling softly at the camera. “When will #caos drop??? 😭😭😭” she questioned, as eager for part three to hit Netflix as fans were.

Fortunately, for fans and cast members alike, Netflix officially announced a release date. On Saturday, December 7, 2019, Netflix released a teaser trailer and shared that season 3 arrives on January 24, 2020. The short trailer features a shadowed Sabrina donning her infamous red jacket and holding a lantern. A sinister voice whispers “welcome to hell” while Sabrina emerges from a fog. “Knock knock knock on the gates of Hell…on January 24th Chilling Adventures of Sabrina returns 🔥” the caption Netflix posted to Instagram reads.

What we know about the plot

But just what can fans expect from the junior season of the dark series? EW released a brief description of the upcoming season 3. “Part Three finds Sabrina reeling from the harrowing events of Part Two. Though she defeated her father Lucifer, the Dark Lord remains trapped within the human prison of her beloved boyfriend, Nicholas Scratch. Sabrina can’t live with herself, knowing that Nick made the ultimate sacrifice and is suffering, burning in Hell under Madam Satan’s watchful eye,” the statement begins.

But, with the Dark Lord trapped inside Nick’s body, Hell is hungry for new leadership. “So with an assist from her mortal friends, “The Fright Club” (consisting of Harvey, Rosalind, and Theo), Sabrina makes it her mission to free him from eternal damnation and bring him back into her arms. However, the Dark Lord’s unseating has sent shockwaves through the realms—and, with no one on the throne, Sabrina must assume the title of “Queen” to defend it against a challenger, the handsome Prince of Hell Caliban,” the description reads.

But what of the mortal world? Looks like the Spellmans are in jeopardy there as well. Aunt Hilda and Aunt Zelda (who has assumed the role of High Priestess for the coven) are seemingly fighting their own important battle. “Meanwhile, in Greendale, a mysterious carnival rolls into town, bringing with it a threat to the Spellmans and the coven: A tribe of pagans looking to resurrect an ancient evil…,” the statement concludes. We can’t wait to see what’s next for Sabrina and her loyal crew. If season three is anything like the first two installments of the popular Netflix show, it will not disappoint.

Posted by mediaadmin at 1:37 PM

Email ThisBlogThis!Share to TwitterShare to FacebookShare to Pinterest
Labels: &#039;Chilling, Adventures, of, S